In the partisan tropics 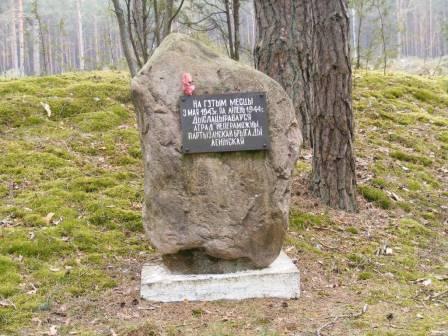 Description of the route: The route is dedicated to the military glory of the Dyatlov region and passes through the most iconic and memorable places of the region.

The route begins at the monument to the peasant Iosif Filidovich, who repeated the feat of Ivan Susanin during the war. He led a group of Germans in the opposite direction from the gathering place of the partisans and for a long time led them along barely passable swamp paths. When the Germans realized that the old man had deceived them, they shot him, but they could no longer get out of the forest and died in the swamp.

In the spring of 1943, when the snow melted, the body of the hero was found by partisans and buried with all military honors. He was posthumously awarded the Order of Courage.

Ore Yavorskaya was popularly called the Ore the Partisan: here, as in the neighboring villages, it turned into a full partisan movement. Therefore, for the fascist invaders, such villages were like a speck in the eye, which interferes all the time, and therefore they tried to destroy them in the first place. The exposition of the local museum will tell in detail about the military past of the region and local heroes-partisans.

The route leads to the memorial at the site of the execution of the inhabitants of the village of Bolshaya Volya by the Nazi invaders on December 16, 1942.

There is a monument erected on a mass grave in which 161 civilians were buried, who were shot by the Nazi invaders.

During the Great Patriotic War, 15 partisan detachments acted in these impenetrable forests and swamps of Lipichanskaya Pushcha, which waged an active struggle against the fascist invaders. Thanks to the theatrical program prepared by the workers of the Museum "Forest and Man", the Mostovskaya Central Regional Hospital, the cultural sector, the Golubovskiy village club and the KSUP "Ozeranskiy", the residents of Mostovka and the guests of the region were able to travel back several decades, when Pushcha was one of the main partisan zones of Western Belarus.