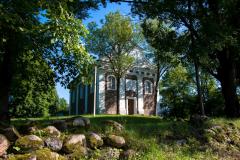 Įvertinkite šį įrašą
(0 balsai)
+375 1515 3 71 21.
Mostovsky district, village of Belavichi, o / s Zarudavye
The temple was built in 1822 by the landowner Honorata Oskirko. The building was originally built as a church, but immediately after the construction was completed it was transferred to the Orthodox Church. From the moment of its construction to the present, the church has been operating, during the time of communist persecution it did not close. In the 90s, steam heating was carried out (heated by firewood), and even earlier electricity was supplied. The church house in Soviet times was transferred to a kindergarten, which operates to the present.
View the embedded image gallery online at:
https://grodnovisafree.grsu.by/lt/pagrindinis/istorines-vietos/item/30307-1248.html#sigProIdfca8630eef
Tweet'as