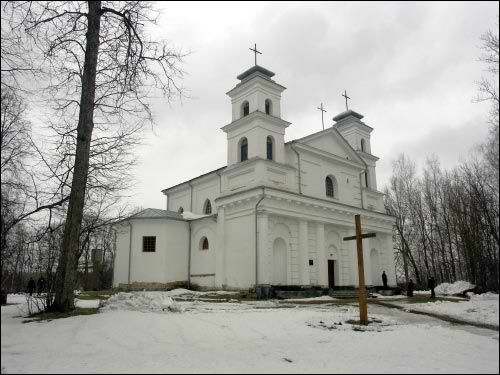 The church style can be characterized as late classicism. He is laid on the means of the headman of the Cirin Cirin Casimir Neselovsky, who had a uncle Yuzef Neselovsky, who died in 1814 and was buried in Kripte right under the altar at the age of 86. During his life, this man was distinguished by a cruel temper and often offended the peasants and a small gentry, for which the last and filed on him and thanks to the lawyer Mikolai Mitskevich, who was the father of Adam Mitskevich, won the process.

In 1943, during the Great Patriotic War in the church of St. Anne, there was a fire, but the arsonies remained unknown, although there is a version that they were partisans. It is also known that in the 50s, a bomb was laid in the church and this bomb was blown up, but the church walls were survived, only the middle exploded. After that, the walls tried to stretch the tractors, but nothing came out and in such a form of the church stood until 1990, while the believers did not take.
By 1995, the church in Voronech was restored and re-consecrated. Parafia here is small, only 140 people, so work continues until now.

In 2010, in the chille, the walls were abundant and installed a lime wooden altar. Work on the restoration and improvement of the church continues to this day.