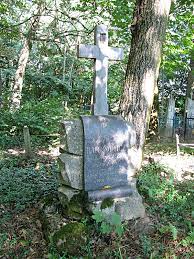 А Catholic cemetery, which can be safely called a repository of works of tombstone sculpture and a cultural monument of burial in the open air. The gravestones of more than one and a half thousand burials will become your guide to the ranks and classes of celebrities in this region of the 18th - 20th centuries. Here are buried the mother and brothers of Maria Vereshchako - the muse and beloved of Adam Mitskevich, as well as the parents of Jan Chechet. A memorial plate was also installed to the last owners - victims of the arson of the manor house by partisans on the night of April 30 to May 1, 1943. Locals at night, under threat of reprisals, buried the charred remains in an unmarked grave.