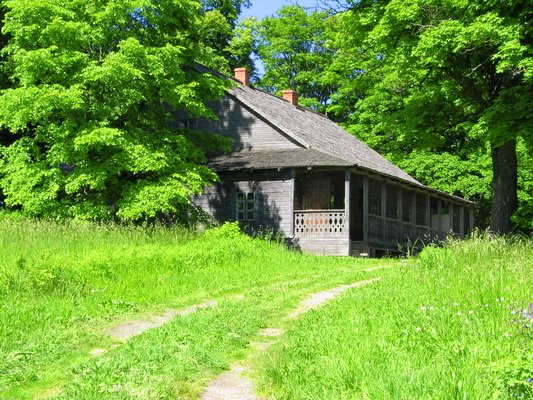 Since 1990, the Literary Memorial Museum-Estate of F. Bogushevich has been opened in Kushlyany. The house of the poet built in 1896 and a stone fence have been preserved. The Bogushevichi estate itself was acquired already in 1749. The old park in the estate has been preserved. There are trees in it from the 18th century. and from the 19th century. The manor still gives an opportunity to imagine how the gentry manor looked like in the 19th century. And walking along the paths and alleys - to feel like a free nobleman or noblewoman with a high sense of patriotism and dignity.

The house exhibits things that are filled with the energy of Bogushevich: a desk, chairs, manuscripts ... Not so long ago, ancestral medallions of the Bogushevich family, whose history stretches back to the 18th century, also took their due place. In the medallions, the power of the relics of the saints, which were brought by the Bogushevichs from places of pilgrimage at different times, is added to the energy of the Bogushevichs. These medallions have protected the Bogushevich family for centuries from illness and misfortune. And now these sacred things are healing spiritual wounds to those who came to the house to pay their respects and honor to a famous compatriot; to those who give their strength and talent for the sake of the Fatherland.

The stone frill houses an exhibition of tools and household items of the Belarusian peasantry at the end of the 19th century. - the beginning of the XX century.

Not far from the estate, visitors are greeted by Lysaya Gora, where, according to legend, a pagan temple once existed. Bald Mountain invites us to a responsible conversation with the souls of our grandfathers, who, according to our myths, live on Bald Mountains and protect and patronize us.
Here, in the forest silence on the top of the mountain, vanity and noise leave us; running a race; grandfathers show us our true heritage, our true essence. For this, only one payment is required - the veneration of the language and the land, which we have inherited; the power of the spirit to preserve it and pass it on to their descendants.