The palace and park complex "Svyatsk" 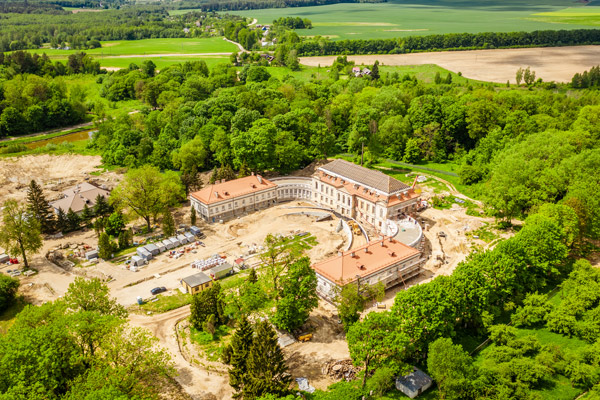 It was built in the 18th century and its architecture resembles the Palace of Versailles. The palace was constructed due to the initiative of a member of the Volovychy family, who owned the land. The construction of the palace was managed by Giuseppe de Sacco, a famous Italian architecture. Volovich chose a perfect location for the construction. Ponds, channels and a picturesque park became an ideal background for the exquisite palace complex, which included three buildings, the central one and two outbuildings.  The central building served as the main (ceremonial).  There were ballrooms, salons and large three-flight stairs. The exterior broadly corresponded to the rich interior decoration. The interiors combined the features of both baroque and classicism. Plenty of sculptures, mouldings and paintings made the premises even more exquisite.

The palace and park complex in the village of Svyatsk was supposed to be the Volovichy’s family ancentral home but it actually wasn't. The old-timers believe that the Volovichy family is to be blamed, due to a gruesome tragedy that happened in it. A legend has it that a rich Volovichy's daughter fell in love with a stable man. When her father found out about it, the man paid for the audacity with his life. He was drowned in a pond. The Volovichy's heiress also suffered from it, she had got pregnant by a plebeian. Her father ordered to immure her alive in a column on the first floor of the palace.

After that, the well-born family faced plenty of miseries. The palace has become empty and only a white lonely apparition wanders around from time to time. They say that the apparition is the restless soul of a murdered girl, the magnate's daughter.

The fate of the palace hasn't been an easy one. There was a medical rehabilitation center in the manor in the 20th century. Nowadays the restoration is being carried out there. It is planned to be a recreational center.