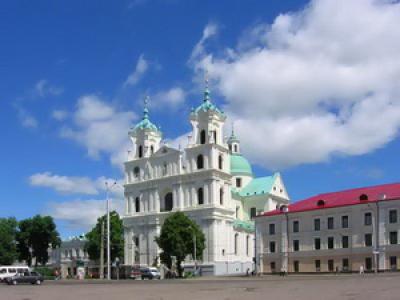 The main   Catholic church in Grodno – the cathedral church, an outstanding example of    baroque architecture. The    church was consecrated in 1705 in the presence of the Polish king August II and   the Russian tsar Peter the Great.

The   church is known for its unique 21m high wooden carved altar  and the wonder-working icon of Saint Mary of the   Students (a copy of Saint Mary of the Snows in the Roman basilica of Santa   Maria Maggiore). The oldest working mechanical clock in Eastern Europe (dating    from the 16th century) is in the north tower of the church.

The oldest pharmacy museum in Belarus (the first    record of which dates from 1687) still works to this day is in the next   building, which was built in 1709.

MAP
of the visa-free territory
«Brest-Grodno»