Church of the Assumption of the Blessed Virgin Mary 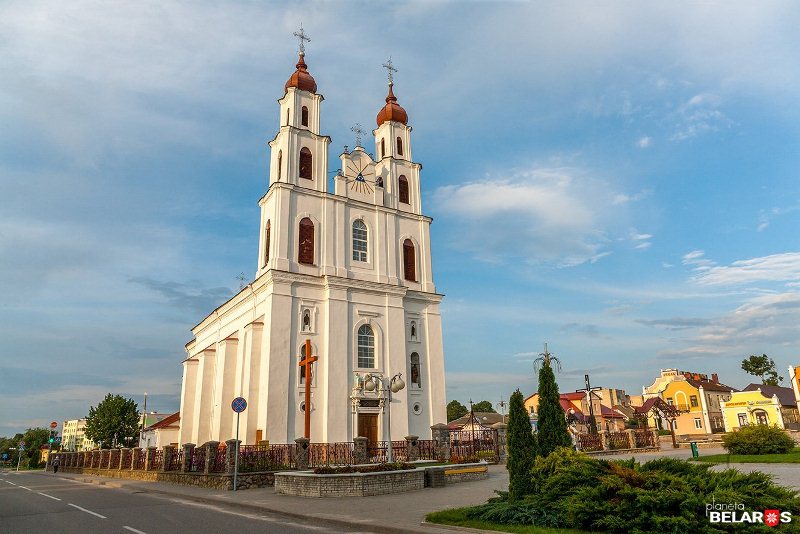 nter. It was built in 1646 by Casimir Leo Sapieha, as evidenced by the inscription on the pediment in Latin: “For the glory of the Almighty God and in honor of the Ascension of the Most Holy, this temple was built by the second chancellor Casimir Leo Sapega of the Grand Duchy of Lithuania, the ruler of Slonim 1646 N.X. . "The temple belongs to the original architectural monuments of the 1st half of the 17th century, which combine the features of the Renaissance, early Baroque with Gothic elements. The temple with 1 nave has a semicircular altar ledge, the side walls of which are symmetrically divided by a high and direct supports, between which large window openings with semicircular ends are cut. The nave is covered with a cylindrical vault. The facade of the church was rebuilt in 1751 after a fire in the Vilnius Baroque style: tall three-story towers with small domes with forged crosses were erected. The original stone is preserved portal with early baroque alabaster stucco molding, an organ decorated with wood carvings and gilding.

When in 1624 the owner of Dyatlovo, Lev Sapega, decided to build a stone church, he could not place it as required by religious canons - from east to west. All sides of the square were closely built up, privately owned, and it was impossible to place the church as required. I had to cost as it is now - the apse and altar are oriented from north to south