Church of the Protection of the Holy Virgin 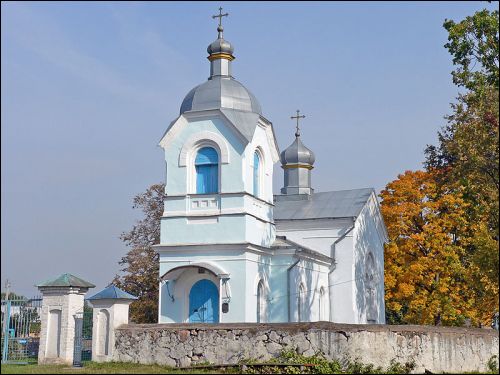 Initially, the temple was wooden with one dome and a high bell tower. Until the mid-19th century, worship was held according to the Greek Catholic rite. After the uprising of the Belarusian gentry against the tsarist government (1831-1833), the Uniate faith was banned, the whole church was ordered to switch to the Orthodox rite of worship. In 1849 the priest Kachanovsky Konstantin is sent to the Palace. He talks about rebuilding the temple. In the early 60s of the 19th century, funds were allocated and the Grodno provincial architects Mikhailovsky designed the temple. The previous wooden temple was moved to the cemetery in the form of a chapel. In June 1883, the construction of a new church began, which lasted 3 years. The volumetric-spatial composition consists of a two-tier belfry, a narthex similar to the cube of the main volume and rectangular in plan of the apse. The bell tower is closed by a faceted spherical dome with a head, the main volume is a gable roof and an onion-like dome on an octagonal drum. In the external decor, profiled cornices and friezes, rusticated edges and panels of arched window openings are used.