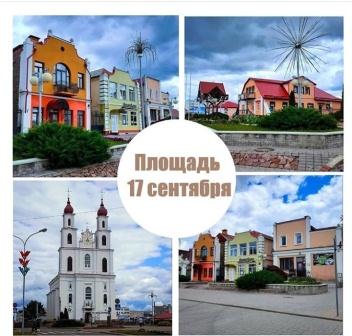 Former Market Square. It arose in the first half of the 16th century. simultaneously with the construction of the church. According to the documents, a wooden church was built in 1515. His image was not preserved. Perhaps the Market Square initially differed in size and shape from the modern one. The fact is that all the buildings - both the church and the houses on the square - were wooden. They were subjected to numerous fires. The square housed administrative, cultural and commercial buildings. Two-story shops are a characteristic feature of the square. In the 30s of the 20th century. in honor of the Independence Day of Poland (Dyatlovo was then part of Poland), it bore the name “September 11th Square”. After the unification of Western Belarus with the BSSR in 1939 received the name "September 17th Square". The name has survived to the present day. But during the Second World War, the Germans renamed the square “Adolf Hitler Square”.