Angel on the graves of A. Protasevich 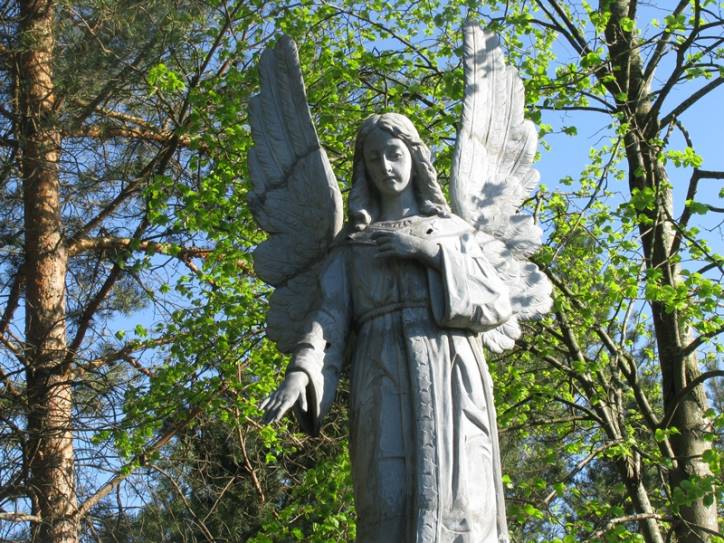 Many people know, and maybe have personally seen that when leaving the ag. The palace of the Dyatlovsky district in the direction of the city of Baranovichi on the right side is the old family cemetery of the Protasevich family, where among the monuments to the deceased on a pedestal rises a monument in the form of an image of an Angel.

Here, on the outskirts of the Palace, in an ancient Catholic cemetery, Apollinaria Protasevich is buried, thanks to whose efforts a church appeared in the Palace. Next to the monument, there was also a crypt, where the children of Apollinaria were buried. She, unfortunately, outlived her children. And after her death, her husband in Naples ordered a monument for her, an angel, brought here, to the Palace, and installed it on the grave of his beloved wife.

Local residents ag. Palace, they say that on Christmas Day Angel flies around the cemetery three times, as if guarding his "possessions" and the ashes of the deceased Protasevich family.

But the old-timers of the Palace say that after the war, during the period of developed atheism, two young activists from local fighters with organized religious life decided to intensify the anti-religious struggle and throw this symbol of faith from the pedestal, which they did with a “clear” conscience.

But, to the surprise of the young atheists, the next day the Angel was back in his place. The activists decided that it was one of the "intoxicated with opium for the people" who restored the Angel to his pedestal overnight.

It was decided to track down which of the politically illiterate population worships the "imaginary" religious cult. Hiding near the pedestal among the graves and sitting all night in an "ambush", the young fighters for a bright future did not catch anyone and did not even see.

And when the first rays of the sun fell on the ground, and the whole cemetery was lit up with morning light, the atheists could not believe their eyes - the Angel again stood on his pedestal. After that, no one ever even tried to disturb Angel in the cemetery.

Nowadays, the students of the Dvoretskaya secondary school, on the basis of which the patriotic club "Spadchyna" operates, take care of the Protasevich family cemetery, carry out work to preserve the historical heritage and call on all those who come to the holy land, where
resting ancestors-fellow countrymen to behave in a Christian way and not offend the memory of the dead.