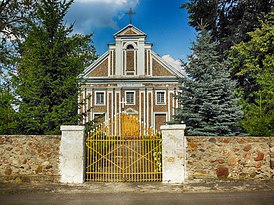 It was built in 1782 from brick, in 1895 it was reconstructed. Only the apse is left unchanged. The walls of the facades are lined with rubble stone, whitewashed architectural details. The interior has a composition elongated along an elongated axis. The hall is divided into two rows of pillars into three naves.

The attractiveness of this object is associated with the interior of the church, which is decorated with seven wooden neo-Gothic carved altars. The church is an architectural monument of late classicism.