The building of the former Radziwill Palace 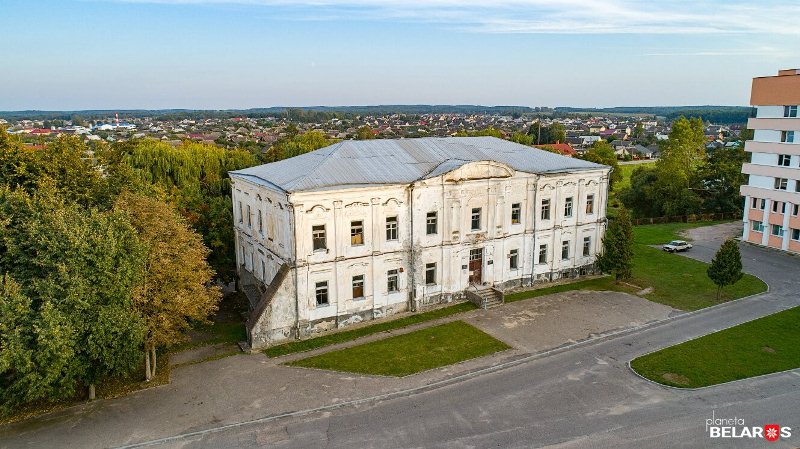 Nikolai Faustin Radziwill began the construction of a palace in the late Baroque style (architect D. Fontana) in Dyatlovo on the site of a wooden castle burnt by the Swedes, which ended in 1751. Initially, the Dyatlovsky palace ensemble was a complex that included a palace, outbuildings and a park, as well as small architectural forms (pavilions, bridges, sculptures) located in a landscape park near the Dyatlovka river. Over the years, the appearance of the Radziwill Palace has greatly simplified. Today it has a flat roof, but meanwhile, in the drawing of Napoleon Horde, dated 1860 - 1870, the palace is decorated with two side three-tier towers with tented finishes and a high hip roof. The facades of the building have preserved the decorative elements of the late Baroque. In 1831, the town of Dyatlovo passed into the state treasury, and the palace accordingly passed into the possession of the state. It was adapted by the Russian authorities under the cavalry barracks. During the uprising of K. Kalinowski, the palace was converted into a military hospital. At the beginning of the 20th century, a two-class school was located in the palace, in which I.S.Dvorchanin studied in 1912. In the 30s - an orphanage for girls. In the post-war years and until recently - a medical institution. The building is not currently in use.