Church of the Holy Guardian Angels 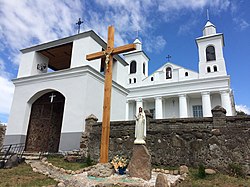 The Catholic parish was founded in Rogotno around the year 1400. In the XV century, a wooden church was built here, which was originally consecrated in the name of the Apostle Bartholomew. In the 1630s, the wooden church passed to the Calvinists, in 1656 it was destroyed during the Russo-Polish war. After the war, restored thanks to the efforts of Andrei Zavisha. The restored church was consecrated in 1673, but soon after the Northern War the church was again destroyed. In 1840, the modern stone building of the temple of the Guardian Angels was built in the style of late classicism. After the suppression of the Polish uprising of 1863, the Catholic church was converted into the Orthodox Church of the Nativity of the Virgin. According to the Riga Peace Treaty (1921), Rogotno became part of the interwar Polish Republic, where it became part of the Slonim Povet of the Novogrudok Voivodeship. At this time, the building of the former church was returned to the Catholics. In 1947, the church was closed by the Soviet authorities, the building was converted into a granary. Some icons and sculptures were saved by believers and returned to the temple after his return to the Church in 1989. After returning to the temple, restoration work was carried out. The church is a monument of late classicism.