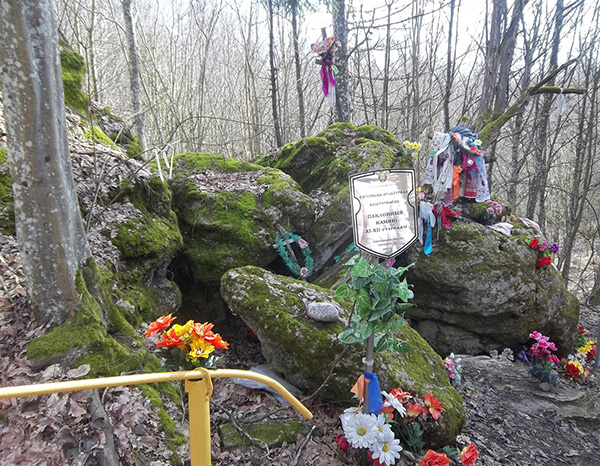 In a cemetery in the village of Gorka, on a hill in a forest, there are boulder stones. Three huge stones formed an arch. And within a radius of 2 meters from the arch lies the fourth boulder stone. The people called it the "stone gate" or "bow stones." The height of the stones is 2 meters 46 centimeters, width 3 meters. The stones are covered with moss. The formation of this rock is associated with the Sozh glaciation, which occurred 220-130 thousand years ago and occupied our territory. Under the influence of water and high ice pressure, sedimentary rocks formed boulder stones. The local population considers the stones holy. Legends and legends about stones tell us that from time immemorial people have come to stones in order to recover from diseases. Pass under the "stone gate", and the disease will go away. True, only decent people and those who came with faith in healing heal stones. And because of bad people, stones every time grow a few centimeters into the ground. At one time, the "stone gate" was so high that a rider could freely ride under them. In the old days on St. George’s Day, crowded holidays were held here with equestrian competitions. The horsemen who gathered from all over the neighborhood had to slip through the gate. This tradition dates back to the time of the Northern War, when Peter I drove by carriage under a stone gate. There is a legend that the stones were the gates of the old church. Once a pan decided to cure his blind dog. He rode three times on a horse under the stones, and his dog ran after him. So he insulted the sacred stones, after which they began to settle in the ground. From the once majestic gates there was only a small opening where you could only crawl. Another wonderful property of the “stone gate” is that sometimes water begins to seep from the stones. People say: "Stones are crying." People use the collected water to treat various diseases. Next to the unusual stones used to be an Orthodox church. Unfortunately, it has not survived to our time. Years later, a chapel was built on this site.