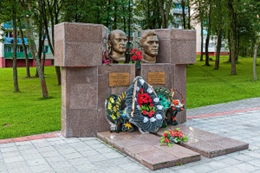 Mass grave in the park on the street. Mitskevich. 64 soldiers and partisans were buried, who died in battles against the Nazi invaders or died of wounds in 1941-1944.

Among the buried are the soldiers of the 3rd Army of the 2nd Belorussian Front, who died during the liberation of the Dyatlovsky district, as well as the heroes of the Soviet Union Pavel Gavrilovich Petrov and Yan Yanovich Vogel.

In 1958, monuments-sculptures of a warrior and a woman with a machine gun, 20 gravestones with the names of the victims, obelisks of P.G. Petrov and Ya. Ya. Vogel.
In 1992, 2009, reconstruction was carried out.