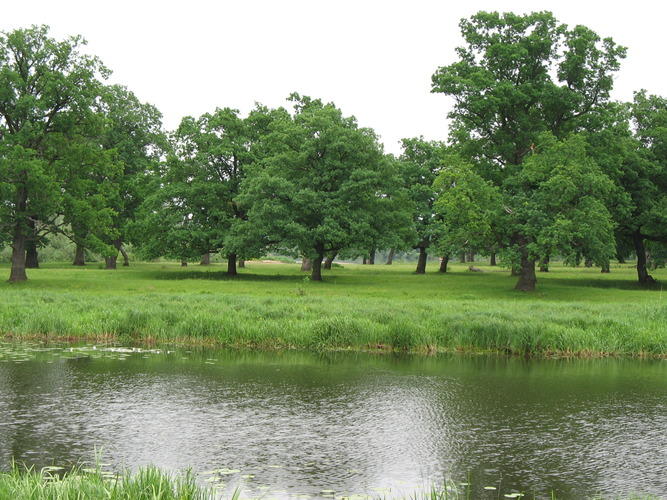 1. Stone monuments on the left bank of the river. Shchara, where the old church and the cemetery were located before the war. During one of the punitive operations the Nazis burned down the church, and only monuments testify to the place of its former location.

2. The old tar, which was built before the war in compliance with all the principles of forcing the tar, which were used in Pushcha for centuries. Today, there are no places left in Belarus where one can get acquainted with the peculiarities of one of the most widespread crafts of inhabitants of Belarusian forests. This building can be considered unique.

3. Miraculous krinitsa in a hollow on the left bank of the river. Shchara, the water in it does not freeze even in the most severe frosts. A cross was erected at the source, consecrated by a local priest.

4. Memorial to victims of fascism and heroes - partisans on the right bank of the river. Shchara. The memorial includes a stele with a bas-relief depicting silhouettes of partisans, civilians, as well as plates with the names of villages and settlements in Mostovsky District, which indicate the number of participants in the partisan movement and residents who died at the hands of the Nazis.

6. Shimki is one of the partisan bases during the Great Patriotic War. During the punitive operation, the Nazis burned down the village. Until now, here you can see the ashes from the huts burned down by the punishers. Post-war buildings were built in the traditional style of Pushcha's architecture. These are picturesque village houses built with hewn eyebrows. Here you can get well water or buy milk.

7. A unique group of trees is located 100 meters outside the village. Alder, ash, white and black birch trees grow close to each other on the outskirts of a small swamp overgrown with reeds. Black birch is listed in the Red Book. The tree is very rare in Belarus. Only 6 of them were recorded in Lipchanskaya Pushcha.

8. The Kamennaya Shchara halt is located at the place where the Shchara is divided into two branches. On the opposite bank of the river is the village of Moskali. Hydronym in its history has a real history of confrontation between two villages - Moskali and Zadvorie. The villages were located on the banks of two branches of the Shchara, which washed away the banks. The more water passed along the rug, the more the village suffered. For many years, even for decades, the inhabitants of both villages fought terribly and built dams out of stones in order to turn the water of the Shchara into an “alien” arm.