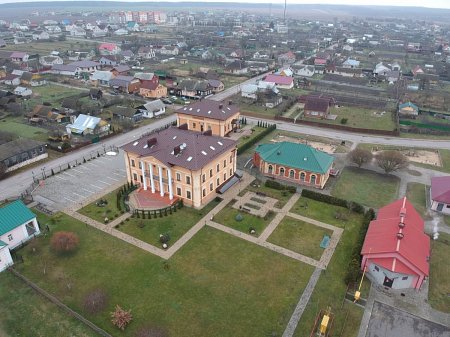 Walking tourist route "History of Jews in the World" (2.5 hours).

In 1765, 607 Jews lived in Mir and its environs. In 1806 - 807 (of whom 30 were merchants, 106 were tailors), in 1833 their number increased to 1583 (75.5% of the total population of the town), and in 1847 there were already 2273 people. The largest number of Jews was registered in 1897 - 3319 (about 62% of the total population). In 1939 there were 5,500 inhabitants in Mir, 3,300 of whom were Jews. Most of them are artisans and traders, some of them are wealthy merchants. Worldly merchants were engaged in industrial entrepreneurship. Leasing was a widespread occupation among the Jewish population. Of great importance in the economic life of Jewish families were occupations related to the production and sale of alcoholic beverages. In this area, there was fierce competition between landowners, Jews and the state. Thus, the Jews of the World in 1696 obtained from the princes of the Radziwills the privilege of selling "hot" drinks. Starting from the 18th century. The world is an important spiritual center of Jewry in the Grand Duchy of Lithuania and the Commonwealth.

Remarkable architectural objects related to the life and religion of the Jewish community have survived to this day. It can be considered that the only complex of buildings of the "synagogue courtyard:" "has survived in the world. the so-called "cold" and "warm" synagogues, a school, as well as kagal and yeshiva buildings.

If Christians and Muslims of the World had one religious object each, then Jews had several. So, in 1886 there was 1 synagogue and 8 prayer schools.

Getting acquainted with the history of Jews in Mir should start with a visit to this private museum, located in the building of an old tavern. Perhaps it was here that Vladislav Syrokomlya once met a sad coachman, who told him his love story, which became the plot of the romance "When I served as a coachman at the post office." Most of the exposition is devoted to Jewish themes. The exhibits of the museum were collected by the owner himself during search activities. Contacts: 8029 9294268. Email: (hidden)

Kirova Street, 25. Today is the post office. Previously it was one of the buildings of the yeshiva. It was opened in 1815 and was one of the most famous higher educational institutions for male Jews. In terms of the number of students, it was the second largest after Volozhinsky (about 300 people) in the Lithuanian direction. In 1939 it was moved to Vilnius.

The synagogue, which means "meeting house", served as a gathering place and a focus of the spiritual and cultural life of Jews. There were several such temples in Mir. The largest synagogue, which was also called "cold", was built according to the project of 1896 in the style of classicism. It was mainly used for celebrations. According to other sources, this building was part of the Mir yeshiva.

The building was called cold because the existing stoves did not sufficiently heat the synagogue.

At the synagogue there was a prayer school "Vysikun" ("Vasikin" - one who starts to pray before sunrise).After the Great Patriotic War, the building was thoroughly rebuilt - a portico, columns and a balcony with a wrought-iron lattice appeared on the facade, the inner space was divided into classrooms. Since 1950, it has housed a secondary school, and in recent years - an educational and production complex.

The building of the present restaurant "Mirsky Posad" housed a synagogue. +3751596 71233 The merchant synagogue or "Teplaya" is the current building of the Belarusbank branch. While the empty building near the hotel "Mirsky posad" and the restaurant is supposedly a mikvah-water reservoir, in which ablution is performed for the purpose of purification. According to the testimony of old-timers in the former building of a kindergarten on Kirov Street, 20 once housed the kagal (the administrative governing body of the Jewish community).

Next to the city library, 20 Kirov street (heder), there was a boarding house for school students. Now it is a residential building, the house of a rabbi. 1 May Street, 1

Old-timers claim that the building in the photo to the right was a Jewish tavern. In confirmation of this, the image of a glass in the decor of the facade. Others testify that there was a pharmacy (there were 4 of them in World) of the Jew Pernik, and on the facade there is not a glass at all, but a pharmacy beaker. By the way, it is known that he was a prisoner of the ghetto. He managed to escape, after which he lived in Israel.

Not far from the cafe "Ragneda" on the 17 September square is the store "Products". According to available information, this building housed the pharmacy warehouse of the Jew Schwartz Charny.
The history of the Jews of the World during the Great Patriotic War is tragic. It was from that time to the present day that the number of representatives of the Jewish diaspora in the world came to zero.

Yereyskie cemeteries, st.Soviet (according to some sources it was founded in the 16th century, according to others - from 1731), After the Nazi occupation, most of the graves were destroyed, many gravestones were stolen or used for construction purposes. The path to the left of the entrance leads to the grave of Eruham hai-Levi Leibovich, the son of Abraham, the spiritual leader and teacher of the local yeshiva, the author of several religious books. The grave of 1936 is today a place of pilgrimage for Jews from all over the world.

On Tankistov street (not far from the building of the Mir Art College). Obelisk of 1966, where in November 1941 1700 Jews were shot

Today, there are even legends about the life of Jews in the world. There was a large bowl for donations in the synagogue. They said that everyone who puts money there will receive ten times more, and whoever takes from there will be cursed forever. Once a thief ran into the synagogue, grabbed as much money as he could from the holy vessel and rushed away. At the same moment on the street he was knocked to death by a wagon. Since then, a ghost has been wandering around the synagogue at midnight. And if he meets anyone at such a late hour, he tries to foist that damn money.

Here's another story told by local historian Viktor Sakel. An elderly woman lived not far from the Mirsky Posad Museum.For many years she kept memories of how, during the war, she witnessed how the Nazis shot her neighbors - a Jewish family - just because a baby was crying in her mother's arms. The old woman often complained that she heard children crying at night. Once

Viktor Yanovich had to spend the night in the museum building. Horror gripped him from what he heard: the shots and the crying of the child were not fiction.