Cycling route "First of all - planes" 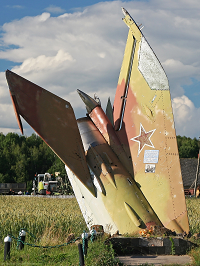 In Soviet times, Shchuchin was the center of military aviation. The airfield was built in the late 30's of last century. During the war, the 122nd Fighter Regiment was located here, and already in the first days of the war the city and the airfield were bombed. After the war, a runway was built in Shchuchin.

July 12, 2014 from the runway into the air four planes, as well as a military helicopter. The program of the first air show included amateur pilots' flights, competitions, skydivers' jumps and other attractions. They say that more than 8 thousand spectators gathered there. Today such holidays have become a good tradition. Moreover, the city guests and its residents have the opportunity to fly over Shchuchin by light aircraft of so-called "small aviation".

And you can get acquainted with the aviation past of the city by visiting two monuments to the planes installed at the entrance (MiG25PU) and in the center of Shchuchin (the famous MiG-19C) and not only.