Bicycle and pedestrian "Along the Oksna River" 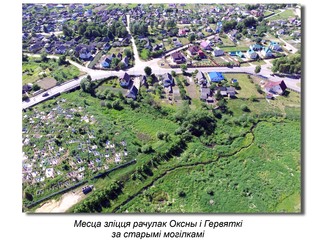 Cycling route "Along the Oksna River" - an opportunity to see picturesque places along the Oksna River (flows through Smorgon and flows into the Viliya River) and get acquainted with the events that took place in different historical periods.

The route starts and ends at the district hospital. Near this place, at the confluence of the Gervyatka and Oksna rivers, at the beginning of the 16th century, Yuri Zenovich founded a church, which is associated with the first mention of Smorgon. Guests will learn about the origin of the name of our city, about the "bear academy".

On the way, the guests of the bicycle route will be told about the events of the First World War, about the post-war Smorgon. The bird cherry at Oksna's will remind you of the plots of paintings by the amateur artist L.V. Trokhaleva, kept in the Smorgon Museum. It is this tree that was captured by Lilia Vladimirovna. Not far from the mouth of the Oksna River (the place where it flows into the Viliya River), the participants of the route will see memorable places associated with the events of the liberation of Smorgon from Nazi invaders in July 1944.

In the same way, the guests of the route return back.

You can ride the route from May to September.

Price: 2 BYN from each participant of the route (group of 25 people).